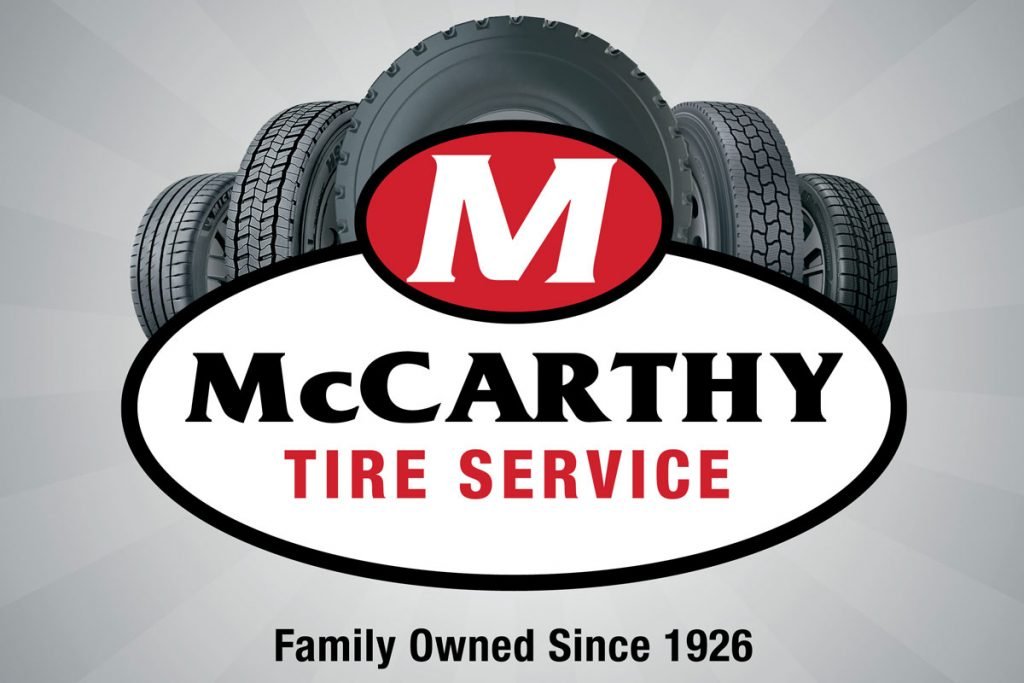 Wilkes-Barre, PA – June 16, 2016 – McCarthy Tire Service is celebrating its 90th year in business by expanding service to its customers through a number of company initiatives. These include relocating five stores to larger facilities, expanding services at eight stores to provide commercial tire and truck repair capabilities, and building two new Bandag retread plants in Wilson, North Carolina, and Wilkes-Barre, Pennsylvania. When completed this fall, the second plant will be one of the largest independent retread plants in the United States.

Joseph J. McCarthy, a General Tire sales representative, founded McCarthy Tire Service in 1926 in his hometown of Wilkes-Barre. The company has grown to more than 50 locations along the East Coast. McCarthy Tire Service is proudly owned and managed by the third generation of the McCarthy family, led by president, John D. McCarthy, Jr., and CFO Kathleen McCarthy Lambert. Members of the fourth generation are learning the business and joining the management ranks.

“My grandfather firmly believed that excellent customer service was the foundation of his business,” said McCarthy. “This continues to be our core philosophy. As a family business, we have a personal investment in our customers. They depend on us, and we do whatever it takes to make sure they are completely satisfied.”

Joseph McCarthy started with one small General Tire store. In 1936, he moved to a larger location in Wilkes-Barre. His son, John “Jack” D. McCarthy, Sr., joined the business in 1957. The company moved to its current site at 340 Kidder Street in Wilkes-Barre in 1962. The business continued to grow under Jack McCarthy, and added a retread plant to the location. During the late 1970s and early 1980s, he acquired stores in Kingston, Hazleton, Scranton, and Williamsport, Pennsylvania.

In 1990, Jack’s three children, Kathleen, John Jr., and Mary Ellen acquired three General Tire stores in Allentown, Reading, and Lancaster, Pennsylvania. John McCarthy became president in 1997, and since then, McCarthy Tire has continued steady expansion through organic growth and acquisitions. The company currently has 47 stores and eight retread plants. It has been named the sixth largest independent commercial tire dealer in the US and the eighth largest independent retreader by Modern Tire Dealer (October 2015, April 2016), and one of the top 50 retail tire dealers in the country by Tire Business (February 2016).

Winter Kicks off a Season of Growth

The company is not resting on its laurels, however. Last winter, McCarthy Tire opened a new retread plant in Wilson, North Carolina, and relocated its existing store in Wilson to the larger, 44,000 square foot facility. The store handles commercial tire sales and services, truck mechanical services, off-the-road (OTR) tire sales and services, as well as automotive tire sales, services, and mechanical services. Currently, the new retread plant has an output of 132 units per day, with plans for full capacity of 198 per day.

At the same time, McCarthy Tire moved its store in Prospect Park, Pennsylvania, to a new location in Trainer, Pennsylvania. Trainer is mid-way between Philadelphia and Wilmington, Delaware, and the store is conveniently located for truck traffic just one mile from I-95. It offers commercial tire sales and services, truck mechanical services, and off-the-road (OTR) tire sales and services. The brand-new facility specializes in fleet work, and it has drive-in service for tractor-trailers and service vehicles.

“The acquisition of the Ragan Tire Group stores extended our footprint in the southeast region,” noted McCarthy. “We are adding commercial tire services to three of these stores to better serve our customers with large fleets.”

The Mid-Atlantic region of McCarthy Tire Service has also seen activity. When McCarthy Tire acquired Hartman Fleet Services in 2015, it moved the personnel and assets to McCarthy Tire’s store in Manassas, Virginia. The company has recently added technicians and equipment to build out its capacity for fleet services. The store now offers its customers a complete range of services for heavy duty truck repair, fleet diagnostic work, and diesel engine repair, including mobile truck repair units.

McCarthy Tire’s store in Hagerstown, Maryland, will also be adding fleet mechanical services when it relocates this July to its new 31,000 square foot location in Maugansville, just north of Hagerstown. The store will move into a former Volvo truck repair shop immediately adjacent to I-81. The store has long served the Hagerstown area with commercial tire sales and services, 24-hour commercial roadside assistance, as well as providing a complete car care center. The move will allow McCarthy Tire to significantly expand its services by adding heavy duty truck repair and fleet diagnostic work to its service menu.

In addition to the store changes, McCarthy Tire is building a new $3.5 million Bandag retread plant for commercial tires in Wilkes-Barre, Pennsylvania. When completed this fall, it will be one of the largest retread plants in the United States. The current retread plant is immediately adjacent to the company’s corporate headquarters.

The new plant will take over a 75,000 square foot warehouse approximately a quarter mile from the existing plant, and convert it into a manufacturing facility with two production lines. The new plant is anticipated to have a full production capacity of 1,000 units a day, twice the current output of 500 units per day. McCarthy Tire is currently hiring and training more than 30 positions on its manufacturing team to keep up with current production demands and to prepare for opening of the new plant.

“We have been a strong company for 90 years, and we are looking ahead to exciting growth in the next few years,” said McCarthy. “We are committed to providing the best possible service to our customers.”

He continued, “We have had some customers for 20, 30, even 50 years. As their business gets more complex, we want to make it easier on this end. Expanding our stores, adding commercial tire services and truck mechanical services in key markets, and building two new retread plants means we don’t make promises – we deliver results.”

When you visit our website, it may store information through your browser from specific services, usually in the form of cookies. Here you can change your Privacy preferences. It is worth noting that blocking some types of cookies may impact your experience on our website and the services we are able to offer.